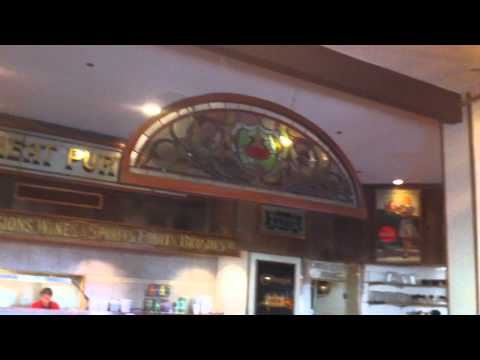 Creech and Nellis split up

One of the things first time visitors to the NTTR (Nellis Test and Training Range) is drive the loop around the range. You head north on I-15, head up 93, get gas in Alamo, hang a left on 318, visit the ET highway sign, then head down 375. Pretty much you visit the front gate, see the LittleAleInn, then you are done. But to appreciate the size of the NTTR, most continue north on 375 to 6. Detour east on 6 to annoy Basecamp, then west on 6 to Tonopah. Get gas and finally head south on 95. The last stop is Creech AFB.
Creech used to be Indian Springs Auxiliary Airfield, with the auxiliary meaning Nellis ran the place. The Thunderbirds practiced there. Not much else was happening. Then the Predator drone came along. If you hung out there long enough, you could catch a Predator in flight. The deal with Indian Springs is the adjacent controlled airspace. You could fly a drone without a chase plane. (If you hang out around the General Atomics test facilities, they fly Cessna chase aircraft with the drones.) At Indian Springs, you could smack a drone into the side of a mountain and nobody except the taxpayer would get upset.
Eventually drones became mainstream and Indian Springs became Creech. But there were no services. Worse yet, civilian infrastructure was right next to the base. The local casino started to serve Predator burgers, named after the drone, not road kill. Some photographer, OK me, was greeted by base security for photographing drones and shooting video of the Tbirds. Ultimately the base did a little eminent domain and stole all the civilian land adjacent to the base. Yeah the owners were paid but locals lost jobs.
Now we have this: https://www.militarytimes.com/news/your-air-force/2019/02/11/creech-and-nellis-are-splitting-up-heres-why/
There is enough activity at Creech that they just can't justify the trip to Nellis for base services. When Creech looks for bids on fbo.gov, we will know the divorce is complete.

Writing a story that takes place in the desert-Any interesting/weird places in the U.S. to visit for inspiration?

Burnt out from job and need to do something new. Always been interested in the desert. Mojave Phone booth, Area 51, ghost towns, Route 66, etc.

Day 4-9 Roadtrip From Coast to Mountains to Desert

Days 1-3 can be found here: https://www.reddit.com/roadtrip/comments/3yhdxb/day_13_roadtrip_up_the_ca_coast/?ref=share&ref_source=link
So we left Crescent City and had to modify our plans a bit. Originally we had wanted to drive up the coast of Oregon and then cut across to Bend, OR. it was a bit too much to drive and considering the road conditions of Hwy 20 probably for the best.
Most of the roads in OR were okay for us - didn't need to chain up our tires in the Subaru Impreza. All in all our car did pretty good! We came along an accident on hwy 126 on the way to Hwy 20. Stopped to help dig a guy out of his flipped truck stuck in a snow bank. We had a shovel in the car for situations that would need us to dig out snow. Luckily he wasn't injured I think a little confused though.
Took forever to get over hwy 20 because someone was "snow scared" in an SUV... We were seriously only going 15mph. Finally the lady pulled out white knuckling her steering wheel and allowed us all to continue on at a better pace. Needless to say, we made it to the Bison Ranch.
Next day, we headed out to Mt. Bachelor for some dog sledding. Those dogs are super awesome. So happy and excited. The guide put together the dog sled team and we were off. I quickly learned that they poop on the run... It was thrilling - they can go pretty fast!
Hit up lunch at a local brewery in Sunriver. Had some local brews and some great food before we headed out to the Sunriver Stables for a one horse open sleigh along the Deschutes River. Peaceful... we saw a bit of wild life - some squirrels, woodpeckers, Herons and Canadian Geese. A nice way to wrap up an awesome winterfest of fun.
Following day we said our good byes to Oregon and headed back into California. Husband was glad to get back across the state line so he could pump his own gas. we had forgotten that in OR the attendant has to pump the gas. This annoyed him so much! I found it comical - I mean think about it, you don't have to leave your car to pump gas when it's snowy out! That said, we were STARVING by the time we got to Reno. We had decided not to eat in Kalmath Falls which is basically the last bit of civilization until you hit Reno... Everything you drive through is pretty much ghost town like... at least in the winter. But we did make it to Reno. And the casino's have plenty of food and drinks.
Got our room at Circus Circus. Top floor! Hit up the casino and drinks and food... plenty of fun to go around. Oh man we played those slots pretty much all day on New Year's eve. Got in a little Black Jack. Alas, we did not win the jackpot. But we did have the jackpot room on watching fireworks in comfort. Happy New Year!
Onwards to Tonopah... drove past Walker Lake... All the other small towns were the slow decline of nowhere's ville. Made it to the Clown Motel. It was really not that scary but then again I don't have a fear of clowns. It's old and out dated for sure, but it was clean. That smell of bleach mixed with that musty carpet smell... we left the door open for a while even though it was cold to try and air it out. No luck really. Uneventful... time to head home through Death Valley.
Headed home... Scotty's Castle Road is closed due to flash floods of October 2015. Went down through Beatty to enter the park. Had a great time driving through Furnace Creek Camp - took a hike through Golden Canyon to the Red Cathedral. Headed down to the Badwater Basin Salt Flats. Tasted the salt - because why not? Yup, it was salt. Headed south down Badwater Rd unknowing that the road closed at Jubilee pass to Shoshone due to the floods. Found a Cyote along the way which came right up to our car. People must have been feeding them. They should be afraid of humans. It was cute and I was grateful for the photo opportunity - but damn.
With the road closed, we had two options... Turn back and find another way out which would take us two hours at least out of the way... or a dirt road out of the park... Eh... what's a little wash boarding and deep sand.. and river crossing? Yup... that happened... Luckily it wasn't too much for us and we were able to make it out of Death Valley in one piece. The rest of the trip was traffic due to people returning from Vegas. We were back in civilization and made it home.
We did so much on this trip... Went through so many biomes. We faced different weather conditions and made it safely through while meeting so many nice people. Now to plan the next road trip...
Pictures: http://imgur.com/a/c6xpN

The casino is sparsely staffed. There is one worker in the casino cage who doubles as the floor person. The machines are all hand pay. If you are in a hurry and want to cash out you will have to wait until they notice the flashing light and come to see how much you are owed. Tonopah Community Endowment Fund 2021 Scholarship Application November 10, 2020 - 7:51 pm The Tonopah Community Endowment Fund Scholarship is a one-time award of $1,000.00 for students graduating from Tonopah High School (THS) in 2021 and continuing their education at an accredited college […] Popular Tonopah Categories. Sights & Landmarks in Tonopah; Fun & Games in Tonopah. Casinos in Tonopah; Nature & Parks in Tonopah; Nightlife in Tonopah; Shopping in Tonopah; Museums in Tonopah; Commonly searched for in Tonopah. Free Entry; Good for a Rainy Day; Admission Tickets. Mizpah Club: Tickets & Tours‎ Tonopah Station Casino: Tickets ... Tonopah Station Hotel, Casino, RV Park, Tonopah: 266 Bewertungen, 204 authentische Reisefotos und günstige Angebote für Tonopah Station Hotel, Casino, RV Park. Bei Tripadvisor auf Platz 4 von 7 Hotels in Tonopah mit 3,5/5 von Reisenden bewertet. Dance with Lady Luck in the Tonopah Casino. Ours is the only hotel in Tonopah with an in-house casino. Best yet, it's open 24/7 so slot machine and blackjack excitement never ends! With 2,900 square feet and eighty-nine gaming machines, you’re sure to get in on all of the casino action. The party never stops when you join us for some exciting Las Vegas-style gaming. Order a beverage and ... Welcome to the Tonopah Station Hotel, Casino, and RV Park. Our hotel is located in the heart of Central Nevada and provides you with the perfect midway location between Reno and Las Vegas, two of Nevada’s most popular cities. Our guests love our ideal location and one-of-a-kind hotel experience. We give you authentic Old West style lodging, a nonstop 24/7 casino, an on-site restaurant that ...